Somehow I thought I already posted this
but apparently I dreamed it.
So, here are the books I read in January.

This was really good.  But I have yet to read a Grisham book that I didn’t like.  A young attorney loses her job in a big firm in NYC due to the recession.  She takes a job as an intern with a small law office that does free work for the folks in a small Appalachian town. At first the book was interesting but not one I couldn’t put down.  I kept on because it is a Grisham book.  Glad I did because the last sentence of chapter 22 was a stunner. Totally didn’t expect what happened. The young attorney finds herself in the middle of a legal battle with big coal companies.  There is a killing, lots of lies, her first real trial, and the questions she begins to find answers for about what to do with her life.

This is one of Sandford’s Virgil Flowers books.  Another very good one.  Flowers is a police officer in Minnesota’s Department of Criminal Apprehension. He prefers fishing over work but does find himself in some interesting cases.  In this one, it starts out with Virgil unofficially helping a friend solve some dognappings.  Then there is a murder he is officially assigned to that leads to a professional meth lab  and the school board. Interested?  It is all connected and takes a while to sort out.  But being the cop he is Virgil gets the bad guys.  For some serious crimes taking place, there is a lot of humor.

This was a good read and fun for me because I know the author and his wife and most of it takes place here in Columbia where we live.  A handsome but not too successful attorney wins a multi-million dollar case that turns his life into a circus.  His wife leaves him for another woman, he is hired to do legal spots on national tv, tries to help his brother and their sort of adopted brother solve the murder of his mother and a couple other older women in Columbia and enters the singles scene after a long time away.  There is a lot going on in this book with many different story lines and subplots.  It’s worth reading, sweet and funny in spite of the murders. 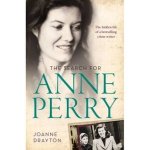 I have told you a bit about this book before.  It was an ok book just not my cup of tea.  It was interesting in that the author Anne Perry had another life before she was the best-selling mystery writer.  When she was a teenager in New Zealand she and a friend murdered the friend’s mother.  It was a sensational case that got lots of press in the 50’s. The background of the story is rather eerie and frightening.  Anne Perry has paid the price for her crime and has worked to come to terms with what she did.  Her past was a secret for years then her story was found and reopened in the media.

The main emphasis of the book is her writing and the process of how she does it.  There are a lot of references to and quoting from her books.  To me, it just became a bit tedious. One thing I did learn is that I would never make it as a writer if it is as repetitive, aggravating, and boring as the book makes it out to be.

If you read this or have read it do tell me what you think.

9 thoughts on “The very good, good and not so good…”