I am here for a chat at
Tuesday Chatter Cafe

Hurricane Irma was thought to be headed straight here with her Category 5 status in tact but she changed her mind or maybe got tired after her time in Florida so she moved a bit west and slowed down to a tropical storm.  A nice surprise from this wicked storm.

This is the night before Irma came to town.
The sky was beautiful. 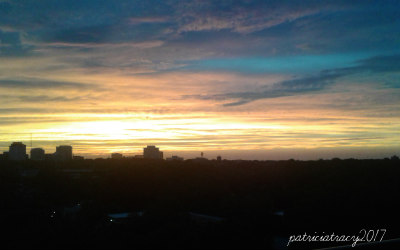 This was while Irma was here yesterday.
Couldn’t see much of anything except blowing rain.

This is the day after Irma’s visit.
Very cloudy with pleasant temperatures. 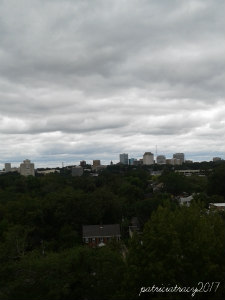 I was here when Hugo came through a few years ago and there was some damage and flooding when he visited and there were several days without power. If you think a watched pot never boils I can tell you watched melted ice cubes never freeze, or so it seemed at the time.

With Irma, I was more concerned than with Hugo’s visit because during Hugo I lived in a ground level apartment but now I live on the ninth floor of a building sitting on a hill.  I was not looking forward to a category 5 hurricane whipping around.

Irma was somewhat polite when she showed up (even if she was uninvited) and the lights only flickered a couple of times but never went out (they did in other parts of the city) and there was little damage or flooding.

As they say, all’s well that ends well.

That being said…not all areas have a happy ending to Irma’s visit. She was indeed a wicked storm and it is heartrending to read about and see pictures of the destruction Hurricane Irma left behind when she moved on. I know this post is a rather light-hearted look at a serious storm and I in no way mean to make light of what this hurricane did in other places.