Write a story or poem of 5 Lines or Less
using the word turkey. 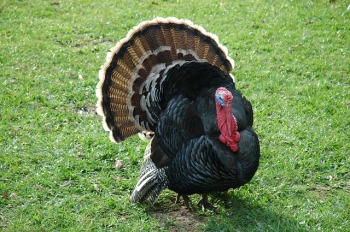 “Hey, Mom, remember the raffle I entered for a Thanksgiving Day turkey?”
“I remember that I bought a ticket for a dollar.”
“Right, and lucky me, I won the turkey! ”
“Ain’t it great?”
“Yes, but sweetie, it’s alive.”

We had neighbors that had this happen. Their kid was so excited! His mother tried to explain to him that it was meant to be for Thanksgiving day dinner and for that to happen it would have to have its head chopped off. It was quite a shock for the kid who was thinking how great it was to have a pet turkey. He didn’t get to keep it as a pet. The turkey went to a local farm. I don’t know what happened after that. It’s hard to think of a turkey that you have personally met as someone’s dinner. I hope the farm he went to was owned by vegetarians.

8 thoughts on “Chatting about turkey…”